Moving from Quebec to Ontario [Benefits, Cost & How To]

Shifting residence from Quebec to Ontario is an overwhelming task, considering you'll be moving across Canada. Quebec province lies in the eastern region of the country while Ontario is nestled on the country's central part. Virtually one-third of Canada's population lives in Ontario, as it is a bustling metropolis with some of the biggest cities, including Ottawa, Canada's capital. That said, there are several opportunities to be explored for newcomers, perhaps a reason why many people consider the long distance move. 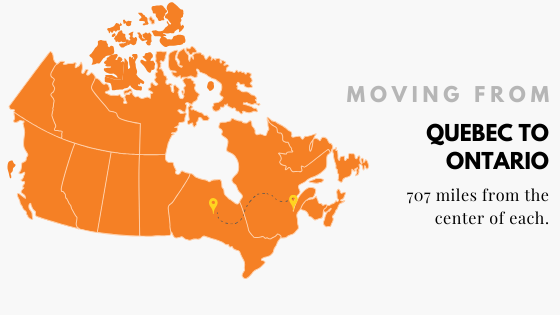 Benefits of Moving to Ontario

According to Statistics Canada, the number of inter provincial migrants has continued to range above 250,000 for the past few years. According to the reports, Ontario was one of the two biggest beneficiaries of migrations from province to province. Additionally, the most significant migratory flows into Ontario involve migrants from Alberta and Quebec.

In a sprawling province like Ontario there are different hustles and bustles. But at the backdrop of the that, the city vaunts of excellent attractions that wow new residents. Here, design enthusiasts will relish the stunning views of Ontario cities' skylines with distinct architecture. For instance, the Victorian-style architecture of the Parliament Hills in Ottawa, and Toronto's 553-m-high CN Tower. Furthermore, there are several parks, lakes, and hiking trails to wow nature buffs. The climate between the two provinces is quite similar since both regions experience a continental climate characterized by short summers and long, cold winters. Cities like Kingston, Ottawa, Toronto, Barrie, Waterloo, etc. lie in the Great Lakes region and experience a temperate climate. That makes Ontario fall in the bucket list of people living in Quebec, especially in northern cities like Wemindji and Chibougamau, which experience extreme winters and permafrost.

If you'd like to start your career or further your profession, moving to Ontario is one of the biggest leaps you can make. Apart from the economic stability, you'll find in big cities like Ottawa, Mississauga, and Hamilton, newcomers in Ontario can also explore different fields like media, arts, technology, and culture in other smaller towns like Windsor and Kitchener.

Additionally, Ontario has a business-friendly environment, allowing investors to save on operation costs. That avails money that can be put into other innovations and investments. Traditional industries have also converged with Ontario's rich IT scene, paving the way for the production of high-quality IT solutions at a 45% less price than in major IT cities in the US like New York and Quebec.

Are you moving to Ontario with your family? No need to worry about where your children will go to school because there is a plethora of both public and Roman Catholic elementary schools that offer quality education. University and college students have better tertiary learning opportunities than in other Canadian provinces. In fact, among the OECD (Organization for Economic Cooperation and Development) members, Ontario has the highest number of educated adults, with 68% attaining post-high-school learning. With learning institutions like the University of Toronto and Waterloo, you'll boast of learning in some of the World's Top 20 universities.

Another reason why Ontario is a first-choice residential area for many is the high-quality of life and affordable cost of living, although you'd expect living costs in Montreal, Quebec, to be somewhat lower than in Toronto or Hamilton-Burlington region.

Currently, Toronto ranks among the top two most expensive cities to live in Canada apart from Vancouver. If you consider moving to a city like Ottawa, the residential costs and rent may come down. While renting a fully furnished apartment in Toronto may usurp at least 2,500 CAD, the expenses of renting a similar property in Ottawa brings down the costs to around 2,500 CAD. That the same range of rental charges you can expect in Montreal.

On another token, the prices of one- and two-bedroom homes in Canada's capital, Ottawa, are the same as those in Montreal. You'll pay between 1,300 – 1,800 CAD. Nonetheless, a home in Ottawa offers endless opportunities to take advantage of Ontario's overabundance of life opportunities.

In addition to the cost of living, you also need to consider the monthly utility charges that come with living in Ontario. If you are a student, you can cut down on monthly charges by sharing an apartment with colleagues. On average, you can anticipate a value of about 135 CAD on utilities.

The Cost of Moving from Quebec to Ontario

Planning a long-distance shift from Quebec to Ontario may present a hard time than you expected, because you lack detailed insights about moving costs. The expenses of making an interprovincial move depend on several reasons and factors. Majorly, fees depend on the number of hours, the number of workers involved in the job, and other extra services offered. Here are the factors that may influence the price of moving.

How to Move from Quebec to Ontario

Your best bet of successfully moving from Quebec to Ontario is using a reputable and professional moving company. For a long-distance move such as that, you need a mover whom you can trust and develop a warm business relationship with. When selecting a mover, remember that in Canada, the moving industry is not regulated. Hence, anyone with the resources can offer moving services. To get the best mover, ensure that the brand is recognized by the Canadian Association of Movers (CAM). Other essential credentials you need to look at include insurance covers, workers' compensation plans, and the Better Business Bureau (BBB) rating.

If you're planning on shifting your place of residence from Quebec and Ontario, choose CAM-approved Allied Van Lines. For almost 90 years, we have provided professional moving services, ranging from household shifts, international, and corporate moving. In our years in the industry, Allied Van Lines has managed to conduct over 55,000 moves in across Canada in the last 15 years. Furthermore, you need not worry about the tools and instruments required for a move because we have the necessary moving resources. Since 2015, the company has won the coveted Women's Choice Award: America's Most Recommended Moving Company. That's mainly owed to the excellent communication channels we maintain with our clients. Further, we understand how important your valuables are. That's the reason we exercise care and professionalism when handling our clients' items.