Moving from Ontario to British Columbia

Moving from Ontario to British Columbia

Anyone who has moved before knows the amount of stress, planning, and sweat involved. Whether it be across town or from one Canadian province to another, there are questions and concerns to be considered and answered. What benefits does this new location bring, what does the moving process look like and what are the costs? Before making a big move, especially a long distance move, you will want to be as organized as possible to make the transition easier. This article will specifically be focused on moving from Ontario to British Columbia and will hopefully shed some light on some of the advantages and the relocation process. 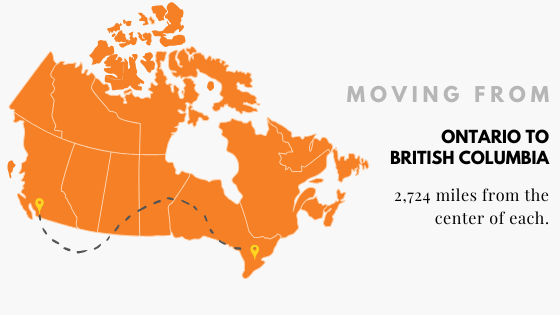 Benefits of Moving from Ontario to British Columbia

British Columbia is known for its natural beauty and has the most protected land than any other province. It is home to seven of Canada's National Parks with 141 ecological reserves, 35 marine parks and 13 heritage sites. It's beautiful mountain ranges are a dominant feature and it is the most mountainous of any other province. It has 27,000 km of coastline covered with a temperate rainforest and the northernmost regions are covered in alpine tundra, ice fields and glaciers. Along with its beauty, British Columbia has other benefits and opportunities to offer newcomers.

Cost of living is an important factor to consider when moving anywhere and the number depends on whether you want to live in bigger cities or small towns. The numbers between these two Canadian provinces don't seem too drastically different when compared to one another. The average rent for a one-bedroom apartment in Vancouver, British Columbia in December 2019, according to data from rentals.ca, is $1,967 while a two-bedroom is $3,058. In Toronto, Ontario, a one-bedroom will cost $2,314 while a two-bedroom will average $2,966. To maintain the same standard of living, you will need $6,524.38 in Vancouver compared to $6,700 in Toronto in net earnings after income tax. Overall, cost should remain relatively the same if moving to the Vancouver area from Toronto, which is where a majority of the provincial population resides, but prices drop considerably further away from the city.

There are several different means of transportation in B.C. that have been added to and improved upon over the past century that makes travel through the province easier, faster and much more comfortable. The construction of roads and highways

has connected thousands of kilometres of land and have been well-maintained. Public transportation is mainly diesel bus and trolleybuses in Vancouver. Passenger trains are limited but are still operational and Rail Canada manages six long distance trains on two lines. Ferries in B.C. offer access to coastal islands that have no road access. Vancouver, Victoria and Prince Rupert are also huge ports for cruise ships and cargo. British Columbia also has 200 operational airports and Vancouver has the second busiest airport in the country. Transportation has played an important part in the economic growth of this province.

The Economy and Job Market

With a low unemployment rate and growing economy, British Columbia is becoming a top competitor. Canada's largest port resides within Vancouver and handles $200 million worth of cargo every day which has helped B.C. expand its economy exponentially. Real GDP has grown by 2.5% (second behind Alberta) compared to Ontario's 1.6%. Vancouver also houses big industries such as biotechnology, alternative fuels and software development. HSBC Canada has its main headquarters in Vancouver as well. These big industries have brought thousands of jobs to B.C. residents. Between June 2018 and April 2019, British Columbia was reportedly the only province to show job growth of 46,500. Unemployment rates are low and the number of new jobs are still expected to grow.

The B.C. coast has the most temperate climate of any other province and winters are oftentimes quite mild. Of course, as you head north or towards the interior, weather can change drastically due to the mountain ranges. Because of the mild and wet climate along the southern coast, large trees are able to grow just like the rest of the Pacific Northwest. Two thirds of the land in this province are covered in forest and much of that has little human contact so it's important to be safe when exploring the wilderness. When it's warm, many outdoor activities include biking, hiking, swimming, camping, rock climbing or boating. Winter activities such as skiing, snowboarding, skating and snowshoeing are enjoyed by residents and visitors. The National Parks in this region are also something to boast about where many of these activities can be enjoyed. These parks were established by the Canadian government for the purpose of protection, recreation, tourism, preservation and education. British Columbia is also home to many forms of wildlife with over 1,000 species of vertebrates, many of which are protected under threat of endangerment.

British Columbia is one of the most ethnically diverse provinces and home to about 40 Indigenous nations and groups with 34 different languages and 93 different dialects of these languages. Over 50% of Canada's Indigenous languages are in

British Columbia. The First Peoples' Cultural Council, establish in 1990 by the government of B.C., was formed in order to administer the First Peoples' heritage, language and culture program in order to rejuvenate their languages, arts and culture. These nations are spread across B.C. and Canada and the provincial governments are doing their best to preserve and protect these cultures.

Cost of Moving from Ontario to British Columbia

Depending on where you're moving to and from, the cost of moving will be subjective. The average cost to move with Allied depends on the total weight of items being moved and the distance they will be travelling. Since the distance between Ontario and British Columbia is roughly 3,700 km, and that's just to get from one province to another, the cost to move will be pricey no matter the company being used. The easiest way to know the cost is to fill out an Allied Instaquote above.

One of the first steps to having a less stressful move is to remove as much clutter as possible and to organize. Getting rid of unneeded items by donating or having a garage sale and even selling heavy items such as furniture will greatly reduce the cost of moving long distance. You are also able to minimize spending on packing supplies by getting free boxes from local businesses such as grocery stores, offices and liquor stores. Start packing room by room and categorize each box; this will help with the unpacking process! Driving to the destination instead of flying will also help save. If flying or have more than one car, there are services available for the safe transport of your vehicle. Don't leave packing for the last minute and remember to always plan ahead of time.

How to Move from Ontario to British Columbia

One of the biggest challenges that will be faced on making the move from Ontario to British Columbia will be the long distance journey between these two Canadian provinces. Allied Van Lines offer several services such as packing and unpacking, assembly and disassembly, shorter-term and long-term storage and custom crating. You can choose your own completely customizable moving plan to suit your own needs. There's also no need to worry about specialty or fragile items. Our movers are trained to professional pack these items for transport. From full-service to basic, Allied is available to answer any questions to make your move as quick and easy as possible.