Moving from Alberta to British Columbia

Moving from Alberta to British Columbia

Many people are moving from cold Alberta to warmer, oceanside British Columbia. If you're one of these Canadians seeking to relocate, you're not alone! There are many great reasons to move to BC, and although a long-distance move across Canada can be challenging, you'll find it worth the effort. We've gathered several great reasons to move from Alberta to British Columbia and an overview to get your move started. 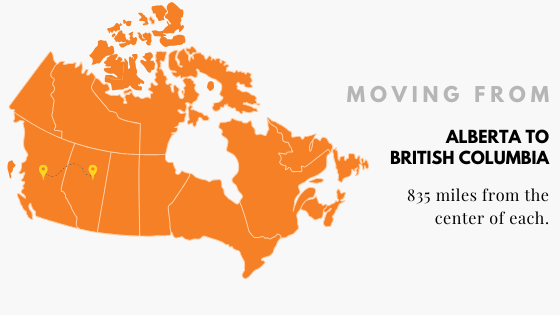 Benefits of moving from Alberta to British Columbia

Before you start packing for your long-distance move, it's important to know more about your destination.

One of the biggest benefits of moving to British Columbia from Alberta is the low unemployment of BC. The province has one of the lowest unemployment in the country and is expected to create about 500,000 new jobs over the next couple of years. Many people seeking better employment opportunities move to BC, and with a diverse economy, there are jobs for just about every skill set.

Some of the biggest employers in the large city of Vancouver are IBM, Intel, Kodak, Microsoft, and Nokia. As a port city, Vancouver handles nearly $200 million worth of cargo each day, contributing to the city's thriving economy. Other large industries in this city include biotechnology, software development, and alternative energy solutions.

The rest of British Columbia benefits from the economies of Vancouver and the province's capital, Victoria. For example, one of the largest employers in the province is MacDonald, Dettwiler, and Associates (MDA), with over 1,000 people working at this satellite and information technology company. HSBC Canada, a worldwide banking and financial services company, also has its Canada headquarters in Vancouver.

Mining and forestry, large industries in Canada overall, are also big employers in British Columbia. Tourism is another key industry in British Columbia, and the city of Victoria, located on Vancouver Island, just a short ferry ride from the mainland, is one of the most popular destinations for tourists to western Canada. Also, Vancouver plays host to many different sporting events, such as the Olympic and Paralympic winter games.

For those with children or those looking at post-secondary studies, the province of British Columbia may be ideal for a great education. Dozens of government-funded elementary and high schools offer top-tier education, putting Canadian students on the right track to succeed at university.

In a different field is the British Columbia Institute of Technology, which specializes in polytechnic education, but also offers diplomas in a variety of other areas of study. BC is home to many community colleges, as well, especially in the city of Vancouver. The arts are another field where British Columbia shines. The Emily Carr University of Art and Design is located here, as well as the renowned Vancouver Film School, a prestigious private arts school.

In a country known for exciting and diverse winter sports, British Columbia is no exception. The varied landscape, from oceans to mountains, offers plenty for the outdoor adventurer. Many BC residents enjoy sailing on the Pacific Ocean or dep-sea fishing. Golf is also a popular pastime in the summer, as is hiking in the mountains.

The resort town of Whistler-Blackcomb is known throughout the world for some of the best slopes for skiing and snowboarding. The community is also a destination spot for world-class restaurants, exclusive shopping, and gorgeous resort hotels complete with full-service indulgences and pampering.

Glacier National Park, located in BC, is an ecologically significant region in Canada. The ancient cedar trees stretch dozens of meters to the sky providing shelter for bears and other wildlife. Caribou roam the plains of the park. Glacier National Park is also a popular destination for rock climbing enthusiasts, with challenging climbing opportunities and easy spots for beginners. The Ainsworth Hot Springs in the southwest part of British Columbia offers a more peaceful, relaxed destination, with naturally warm pools and breathtaking horseshoe caves.

Cost of Moving From Alberta to British Columbia

The cost for a long-distance move from Alberta to British Columbia can vary widely,

depending on the size of your household (how many rooms you'll need to move) as well as specifically which city you're moving from and which one you're moving to. The distance includes mileage for the moving company's truck, as well as the cost for expert movers to load and unload your belongings.

While some families chose to rent a truck and make the move themselves, this can be stressful and physically demanding. Hiring a professional moving company for a long move is a much better option, as you'll get the benefit of trained shipping personnel, the right equipment to load, secure, and protect your belongings, and coverage in case of any mishaps.

For a rough estimate, the cost for moving a one-bedroom apartment could be around $600-$1200, while a 3-bedroom home may run about $2,400 - $4,500+. You may expect to pay extra if you have outsize items, like a piano, or if you need to have one or more vehicles transported. Professional packing services can range from $600 to $1,900, depending on how much you need to be boxed. Finally, the time of year that you choose to move matters. Moving in peak season, typically the spring and summer will cost more than if you choose to move in January.

How To Move From Alberta to British Columbia

Before you pack your first box, it's important to do a little homework about your move from Alberta to British Columbia. Decide where you want to live – whether it's the bustling city of Vancouver, the island city of Victoria, or one of the smaller towns further east in the province. Once you've selected your new home, check out the schools in the area as well as medical facilities, financial services (if there is a branch of your current bank there), insurance companies, and car mechanics.

You may also wish to explore recreational activities and see if there are things that you like to do. You may love the vibrant culture of a large city, with plenty of shopping and local dining opportunities. Or, you may be more outdoorsy and wish to live near one of the province's many natural wonders and state parks.

Your job is important, too. If you aren't moving from Alberta to British Columbia because of a job you were offered, you'll want to scout employment opportunities in advance. Begin sending out resumes before your move, and arrange for interviews if you can. For example, if you're looking for a job that has regulatory oversight, you'll have to make sure that your certifications can be transferred from Alberta to BC. If they aren't, then you'll need to research how to be qualified in British Columbia

insurance records, as well as immunization records for children and their school records. If you have pets, you'll also need vet records for them, and you may wish to scout for a new vet in British Columbia, as well.

Ready To Get Started

Moving long distance from Alberta to British Columbia can be challenging, but at Allied Moving, we're here to help. We have the experience and professional knowledge to move households of any size across Canada. Simply fill out the information in the Instaquote form above, and we'll calculate and estimate for your move. Then, give us a call or go online to book your moving service. It's that simple!