Moving from British Columbia to Alberta [Benefits, Cost & How To]

Vancouver, British Columbia is the most expensive city in North America, beating out cities such as San Francisco and New York. While Victoria on Vancouver Island is the capital of British Columbia, it's actually Vancouver that is the central hub of the province. Vancouver is the largest city in British Columbia and where many people go to work. However, due to the incredibly high cost of housing (the average price of property is $1.3 million for a one-story house), many people have to commute into the city for work. Families and young adults are pushed out to the suburbs for living and forced to spend hours in traffic congestion commuting for work.

All of this is making more and more people leave B.C. for its neighboring province, Alberta. Unlike B.C. Alberta has a very affordable cost of living, a great job sector, and a reasonable housing market. 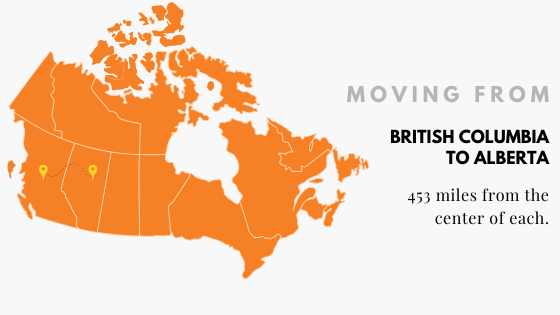 Benefits of moving from British Columbia to Alberta

Many benefits that may play into a Canadian's decision to move to Alberta and leave British Columbia behind.

To be clear, Alberta can have high unemployment rates. The province is closely tied to the oil industry, so when oil demand dips, unemployment rates skyrocket. Luckily, if you're not moving for oil, you shouldn't be impacted. Alberta has a hot job market with several large organizations headquartered in the province.

Cleanest City in the World

In 2007, Forbes named Calgary the cleanest city in the world. In 2014, it won the same title, this time from Mercer Global Financial. Calgary is a notoriously clean city with minimal air pollution, clean drinking water, and an excellent sewage system. While this will never be the main reason you choose to move to Alberta, it's definitely a nice bonus!

Alberta's cost of living is generally less than British Columbia. You can make 22% less in monthly income and maintain the same standard of living as you did in Alberta. Entertainment, rent, housing, dining out, and more are all generally less expensive in this province.

Alberta offers a very low sales tax for its residents. Unlike other provinces, it doesn't impose a provincial tax on people, so everyone only pays the five percent national good and services tax (GST). In comparison, B.C. charges a seven percent provincial tax on top of the GST, so British Columbians are paying a whopping 12% sales tax!

There are endless new stories of young professionals choosing to leave B.C. over the housing market. The rental market is incredibly competitive and has no stability. Not to mention that most young professionals feel that despite making a good income, they'll never be able to afford to own property in Vancouver. The average cost of a house in Calgary is less than half of Vancouver's prices. This alone is a huge factor in most people's decision to move to Alberta.

The majority of Albertans live in homes between 1,000-1,500 square feet. This is a decent amount of space, allowing people to have yards, pets, and their claim of land. For people who are considering having families, space is important to living a quality life.

For the physically active, Alberta is the perfect new home. Popular ski towns Banff and Jasper are nearby for all your winter sports activities. You can also visit these areas for beautiful hikes in the summer. Additionally, there are plenty of parks for running, biking, and more. You will have no problem getting your fill of exercise and sports in this province.

Alberta gets a lot of sun (especially in comparison to B.C.), so good weather is almost guaranteed throughout the summer. And, Alberta gets a decent amount of snow in the winter. This is perfect for someone who is looking to experience proper seasons!

Cost of moving from British Columbia to Alberta

The average cost of a move from British Columbia to Alberta is $3,595.

Of course, this cost will be very different from person to person based on a variety of factors. Many things will impact your total expenses, such as:

The best bet to know the exact cost is to fill out the Instaquote above.

Most Popular Cities in Alberta

Calgary is one of the main cities in Alberta, nicknamed "cowtown" for its Western influences. Despite not being the capital of Alberta, it's the most populous city in the province and considered the central hub by most people. Calgary is a modern city and is world renown for its annual Calgary Stampede festival.

Edmonton is Alberta's capital, known for being family-friendly. The city has culture and diversity, with plenty of festivals and celebrations throughout the year. Along with Calgary, it's the main spot for job opportunities.

People come from all over the world to visit the beautiful town of Banff. The town is surrounded by mountains, giving it a beautiful landscape. Banff has several ski resorts, which people flock to for relaxing, fun winter holidays. But, the town is also busy in the summer, as people come to hike and visit. This is a perfect town to move to for people who are in the hospitality or tourism industries.

How to move from British Columbia to Alberta

Moving from B.C. to Alberta is a long-distance move, but at least it's still within Canada. It won't be as complicated as you think. A long-distance move can feel overwhelming, but with proper planning, it can be as smooth as any other move.

Inform Necessary Parties of Your Move

Make sure to notify the following people that you're moving:

After you've established a new residence, you will need to notify a few more institutions of your home:

You have a lot to deal with a long-distance move. You need to set yourself up for your new job, find a new family doctor, make yourself comfortable with the new neighborhood, and more. The last thing you need to worry about is getting your stuff safely from your old home to the new one. By hiring trusted movers, you can take a lot off your plate, and give more critical tasks your full attention. Allied is experienced in long-distance moves around the world. We have been around for more than 15 years and have completed over 750,000 moves. You can trust us to move your home quickly, safely, and at a reasonable price. And, we offer add-on services, such as packing and unpacking, for those who need it. Contact us today for more information or fill out our Instaquote.