Moving from Ontario to Alberta

Moving from Ontario to Alberta: Benefits, Cost & How To

Canada is a large country and it is not an easy thing to move across the country. Moving long distances within Canada requires a lot of planning and commitment.

The thought of moving such long distances intimidates most people. If they have choice, most people will abandon the move simply because it is too difficult.

Change is not always easy but it may be necessary. Moreover, Alberta is a great place to live so you will probably benefit by making the move. 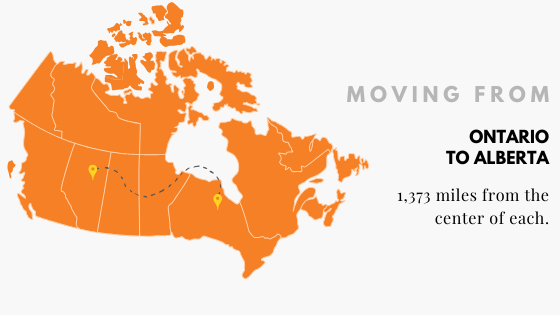 The move has to be worth it though. The benefits of the move have to outweigh the cost and that is what we will be discussing in the following article:

Benefits of Moving from Ontario to Alberta

There are several benefits of moving from Ontario to Alberta including:

The main advantage of moving from Ontario to Alberta is the lower cost of living. Almost every aspect of living in Alberta is cheaper than living in Ontario.

On average the purchasing power in Ontario is 25% lower than that in Alberta.

The quality of where you live can ultimately be chalked down to who you live with and if you live in Alberta, you will be living alongside some of the friendliest people you will ever find.

Many people who move to Alberta or even just visit are surprised at how welcoming people in Alberta are. They greet each other on the street, wave when driving and will stop for passengers even when the latter are in the wrong.

Therefore, if you want to live in a place where you know your neighbor and even spend time together, then Alberta is the place for you to live.

Though you cannot avoid paying taxes, you can pay less of them when you move from Ontario to Alberta. You will generally pay lower taxes in Alberta than in Ontario.

For starters, Alberta does not have a provincial sales tax as is the case with many other provinces in Canada. Therefore, every good you buy in Alberta is probably cheaper than in Ontario.

When you live in Ontario and other provinces in Canada, you pay an average of 15% in provincial and federal sales taxes which can make goods very expensive.

In 2007 and 2014 Alberta was named as the cleanest city by Forbes and Mercer Global Financial respectively. If that is not an approval stamp for how clean a city is, I don't know what is.

There is not much air pollution in Alberta. The water is available and drinkable while the sewer systems are also clean.

The city's authorities have gone to great lengths to keep the city clean including starting some very effective recycling programs. On the other hand, there are heavy fines imposed on littering so you should be careful when you move to Alberta.

Cost of Moving from Ontario to Alberta

There are certain costs that you have to consider before you make the big move from Ontario to Alberta. These costs are largely unavoidable and include:

If you are moving to Alberta, the first thing you will need to check out is where you will be living. Housing costs vary from province to province based on the cost of living.

If you plan on getting a mortgage and purchasing property right away then you will need to look at how much that will cost you. The rate of your mortgage will obviously vary depending on the bank, your credit score and other factors.

If you are like most people, you will probably be moving into an apartment. You will need to evaluate the cost of renting an apartment in Alberta depending on the size of your family and economic capacity.

The cost of living will depend on what kind of expenses you usually incur when you are living normally. Moving will either bring a burden on your finances or present an entirely new set of opportunities.

You need to find out the price of necessities such as food, utilities and other necessities. You will also have to find out if there are any provincial taxes you need to pay in Alberta when you move there.

The cost of living also includes luxuries such as entertainment and hobbies. You will need to evaluate how much you will be spending on such luxury goods and services to plan accordingly.

Unless you are a minimalist and can pack all your belongings in your car or have the financial capacity to buy all new household items in Alberta, then you will probably be moving a few things. The cost of transporting your entire household from province to province can be a substantial sum.

You will have to decide if it is more economical to hire a moving service or to simply move the things yourself. If you can't find someone to help you move the bulky items even better.

You will also need to find out about transportation costs in Alberta. Transit fees, monthly passes, insurance premiums and gas prices are all costs you will need to take into account.

How to Move from Ontario to Alberta

When moving all your possessions long distance, then there are three options at your disposal.

You can hire a moving company to help you move such a long distance. Such an approach is for those who do not particularly fancy handling a lot of the heavy lifting.

Moving professionals will help you with just about every aspect of the move. They will pack your belongings, load them onto the truck, transport them long distance across Canada and unpack for you.

If you can afford to hire a moving company then it certainly is the ideal option. It will be expensive but on the plus side you do nothing at all.